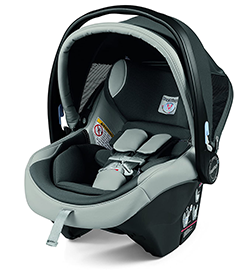 The Peg Perego Primo Viaggio 4/35 Nido is an ultra high-end infant car seat boasting market leading safety features such as an anti-rebound bar, a load leg, and one of the largest canopy hoods we’ve seen on a car seat. Parents that spare no expense for their baby’s comfort and safety should consider this car seat for their newborn.

Is this premium car seat with its swoon worthy Italian textile and tailoring worth the hefty price tag? Let’s jump right into our detailed review of the Peg Perego Primo Viaggio 4/35 Nido to see how parents who spent big bucks on the Nido feel about this infant car seat.

Key Features at a Glance:

Peg Perego car seats are made in Italy and are known for their superior quality material, design, and finishing. Many parents are smitten with the fine stitching and quality of the Nido. Purchasers almost uniformly agree that the quality construction makes for an extremely durable car seat that cleans easy and stays looking new.

Parents also like the protection that the Nido offers. The entire shell and head panel of the car seat is covered with a thick layer of energy absorbing foam to ease the amount of force exerted on your child in an impact. This helps protect the baby’s torso and head. While the shell is lined with rigid EPS foam, the headrest is made of high elasticity EPP to help protect your child. 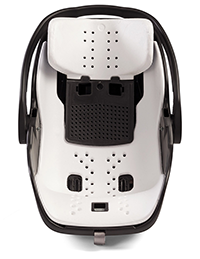 The Nido also boasts a dual cushion system made from soft, breathable fabric that is meant to grow with your baby. Stage 1 of the cushioning system caters to newborns and is designed to support a baby’s neck and bottom, with many parents finding that their preemie fits snugly in the stage 1 cushion. Stage 2 supports growing babies up to the weight of 35 lbs.

Perhaps the most raved about feature of the Nido is the extendable Pagoda Hood which is ginormous! It can extend all the way forward to completely cover the baby. The canopy hood is made from fabric that is UPF 50+ thereby protecting the baby from harmful ultraviolet rays, especially on long strolls or car rides. The canopy has an easy to use zipper and side mesh netting for increased ventilation.

Why do parents spend big money on the Nido? Mainly for Safety

The Peg Perego Nido has performed very well in crash tests. Two of the most stand out safety features of this car seat are the anti-rebound bar and the load leg. While these safety features are common in Europe, they are not often seen in North American models.

What exactly is an anti-rebound bar and why is it such an important feature in a car seat? In simple terms, it is a steel bar at the foot of the car seat which helps rear facing car seats manage rebounding during and after a collision; it helps minimize risk of injuries to your rear facing child in the event of a crash. The anti-rebound bar in the Nido helps reduce rotation caused by a collision by up to an estimated 50%. 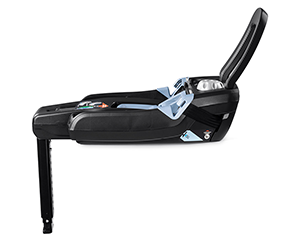 Since safety is the number one thing parents look for when getting a car seat, this is definitely a feature that makes it stand out from the crowd. It’s worth mentioning that anti rebound bars are not required on car seats in the US and are an added, extra safety measure to protect your little ones.

The other feature that stands out in the Nido is the load leg. The load leg helps stop the car seat from moving back and forth in the case of a collision. When a crash happens, the Energy Management System crumples under loading and it absorbs the energy, moving the force away from your baby and into the floor of the vehicle.

These two European safety features combined – the anti-rebound bar and the load leg – work to make the Nido car seat highly rated in the safety department.

Is the Nido Car Seat Easy To Install In A Vehicle?

The Nido can be easily installed in 3 different ways – the LATCH system, using the Nido base with the vehicle’s strap, and installation without the base.

With regards to the LATCH method, some parents do complain of difficulty tightening. Attaching the connectors to the anchor is simple enough but releasing the connectors and tightening the strap is relatively hard. Trying to get the straps installed tight enough is a universal complaint of any car seat owners, not just Nido owners.

According to some Nido owners, using the car seat base and the vehicle’s strap is easier than using the LATCH method. To install, you simply thread the strap through the color coded sides on the car seat and the belt lockoff located at the center of the base. 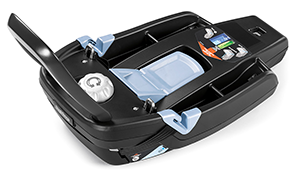 The consensus seems to be that the easiest method of installation is without the base, using the American or European belt path. Still, most parents are going to be a lot happier with a base installed because it makes it easier to get their baby in and out of the car without disturbing them during a nap.

Do Parents Think The Nido Is Easy to Use?

The Nido comes with a 5 point harness that has a good amount of padding on both the shoulder and crotch strap. Tightening and loosening the harness is simple and using the buckle on the harness is easy. However, parents do complain that the chest clip is rather stiff and in some instances that can make it difficult to use.

The Nido headrest features a non-rethread height adjustment system with 6 different positions to choose from. Changing the height is straightforward with just a squeeze from the back of the car seat. Having the no rethread feature helps reduce the chance of user error during installation or adjustment.

What is the Weight and Size of the Nido Infant Car Seat?

Consider the dimensions of the base when trying to plan three car seats across the back seat or other similar arrangements.

Since it is a bit heavy, thankfully the Nido is compatible with most Peg Perego strollers without using an adapter. Parents can click the car seat into the stroller and get on the move. This is a very useful feature for parents as it makes transporting the baby from the car to the stroller a breeze. Also, parents have one less thing to worry about losing while out for a stroll with their little ones.

For compatibility with other stroller brands, an adapter is needed.

If you’re looking for a high quality car seat with your main priority being safety, then the Peg Perego Primo Viaggio 4-35 Nido will not disappoint you. The fabric, design and safety features are at an exceptionally high standard and shoppers who buy the car seat rave about its quality construction.

The feature parents love the most is the canopy hood, which provides the baby with complete coverage. 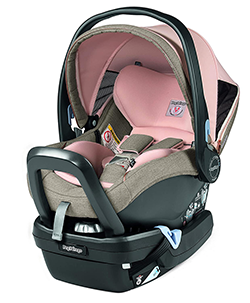 Parents also like how easy it is to install the car seat without a base, but again most of the highest shopper feedback remarks go to the high end Italian tailoring and upholstery.

A key consideration for parents is going to be the price on the Peg Perego Nido, which is on the higher end compared to other car seats. Another thing that gives some shoppers pause is the weight as it is on the heavier and bulkier side.

Our overall verdict for this car seat is that it is a high quality product and worth the amount you pay for it. Its safety features are truly market leading, way ahead of the game compared to other car seats and neither style nor functionality are compromised. The Peg Perego Primo Viaggio 4/35 Nido is a great buy for those shopping for a premium car seat with the best safety features.