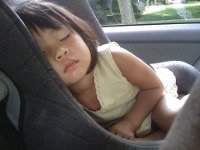 It is something you see parents do all the time: leave their sleeping baby in a car seat. However, a new study has found that doing so can result in potentially deadly breathing problems for your child. While it might seem easier or less risky, because no one wants to wake up a sleeping baby, it can do far more harm than it can do good.

Babies aren’t able to control their bodies in a way children and adults are. If they are having trouble breathing, they cannot adjust themselves. After 30 minutes in a car seat, the heart rate and breathing rate in babies can go up significantly.

The study itself focused in on rear-facing seats for children under two months old. They looked at 40 different children placed at a 40-degree angle. This is the suggested angle when traveling around 30 miles per hour along a straight road. Of course, traveling with a baby on a bumpy road may put more pressure on the chest, lungs, and heart.

Dr. Peter Fleming is a pediatrician at Bristol University, oversaw the study. He was concerned at the rate of Sudden Infant Death Syndrome (SIDS) and wanted to find more that contributed to the issue. When he was doing research, he found that there was a connection between car seats and infant death.

Scarily, the study had to be stopped several times because the increase in breathing and heart rate seemed to be distressful for the babies. As these rates grew, there was a “significant” decrease in their blood oxygen levels.

Dr. Fleming says that babies should travel in a car seat that properly secures them and that parents should follow the law.

He said to the Mirror:

Half an hour is not an issue but beyond that we can’t say. So just think carefully what length of journey. For that reason we thought it was was important to carry out this study. We could not answer the question whether these deaths were caused by the car seat. (In the test) we found babies blood oxygen saturation fell, suggesting breathing problems and increased heart rates. If you find this effect, this needs to be studied properly.

Even though the findings are a bit disturbing, Fleming did stress that babies should travel in a car seat. The best thing to do if you have to take a baby in a car seat for an extended amount of time is to take the baby out for 10-15 minutes so that you can give him or her time to breath.

If possible, you should try not to take longer trips until your child is older.