Tragically in the United States nearly 50 children die each year from being trapped in a hot vehicle. Often this is the result of parents unintentionally leaving a young child strapped into a car seat or sleeping in the rear seat.

A new law went into effect on Thursday in Italy that will help prevent hot car deaths from children being left behind in a car seat. The Italian law requires vehicles to alert the driver if a child is alone in the rear seat or car seat.

Italian law requires drivers to maintain these safety features until the child is 4 years old. Fines and suspended licenses can be imposed for drivers who do not comply. Toddlers are especially vulnerable as they nap in their car seats.

The Italian law allows for the alerts to be either visual and audible alerts in the car or smartphone messages sent to the driver’s phone. A number of aftermarket devices are available online and in stores for parents. Prices for these devices range from $20 to over $100. The government expects to reimburse parents for the price of these devices in a yet to be announced incentive program.

There has been some concern about the quality of the aftermarket safety devices. A study conducted several years ago by the Children’s Hospital of Philadelphia found many of the devices were unreliable and inconsistent in their ability to detect children.

The American government has been much slower than Italy to regulate the problem. None of the fifty states have a similar car seat law in place. The US House of Representatives is reviewing a bill called the Hot Cars Act, which would require the Secretary of Transportation to mandate the devices in motor vehicles. The Senate also has a similar bill in committee. The bills are in the early stages of the legislative process and it is unlikely a vote on either will occur anytime soon.

US Manufacturers have been a bit more proactive. Earlier this year the AAM and AGA announced that the industry is committed to have all cars and trucks outfitted with rear-seat reminders by 2025. These two organizations account for almost all of the light vehicle sales in the USA. GM and Subaru are some of the manufacturers getting a head start and outfitting new models with the technology now.

At a minimum, the systems need to alert the drivers with a reminder message when they turn off the vehicle. The GM model uniquely does not use sensors to detect the child but instead measures the door opening and closing. This helps eliminate some of the problems that arise trying to fit alarms that work with the myriad of car seats available to parents. 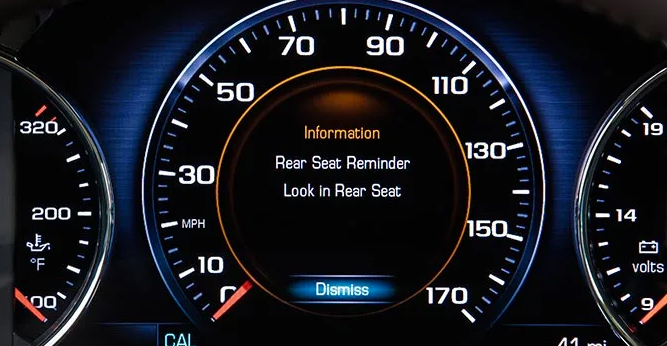 Shockingly 14% of parents report leaving a child under 7 alone in a parked car according to a 2014 Public Opinion Strategies survey. Remember that it is never okay to leave children alone in a vehicle for any length of time. In just 10 minutes a vehicle interior can rise 20 degrees on a hot day. Children also are at an increased risk of heat stroke because a child’s body heats up three to five times as fast as an adult. Please always use caution when transporting children in your vehicle on hot days.