We currently live in a society that is very technological advanced, we are constantly surrounded by new inventions, and are always being introduced to ideas for new creations. These creations are thought to aid in helping make situations easier for individuals. Although new inventions do often times help make the lives of those they impact easier, and more efficient, are new inventions really the best option for every aspect of life? What if we, as a society put more time into analyzing, and making the inventions we do already have safer? We could further learn about inventions that are already put into use, and put laws into place to ensure these inventions are best for all of society.

New creations draw so much attention because they are known as the newest thing that just hit the block, and are seen as a status symbol by so many. People can’t wait when a new iPhone hits the shelf, and often times dish out hundreds of dollars to hold the best new thing. Unfortunately, it seems as though people don’t bat an eyelash when it comes to buying a car seat for their child. They often choose the cheapest option without worrying too much about the safety standards that come along with that piece of equipment. If people don’t do research when buying a car seat think about how little effort, they put into remembering to carry around such a piece of equipment when using public transportation. In today’s fast-paced, ever moving world many individuals don’t think twice about stepping onto a bus, or into an Uber with a child, forgetting immediately car seat laws even exist.

In a world like today I think it’s more important to put laws into place that make current inventions serve a better use to the public, rather than creating more inventions that may not stand up to the level of safety standards that are needed. In such a fast-paced world like today, we need to protect those who are unable to make a stand for themselves, nobody would intentionally put a child into the way of harm, but that’s exactly what’s happening when a mother climbs into an Uber with a child in her arms. There are no safety belts located within the Uber car that ensure her child is latched in, yet nobody thinks anything wrong is occurring in the situation, for the actions seems to be of the norm. Would a mother simply lay her child in the back seat of her own vehicle when driving? Of course not, for such an action is seen as irresponsible and cruel, as well as illegal. Is an Uber any different?

Number of Active Driver-Partners in United States Each Month 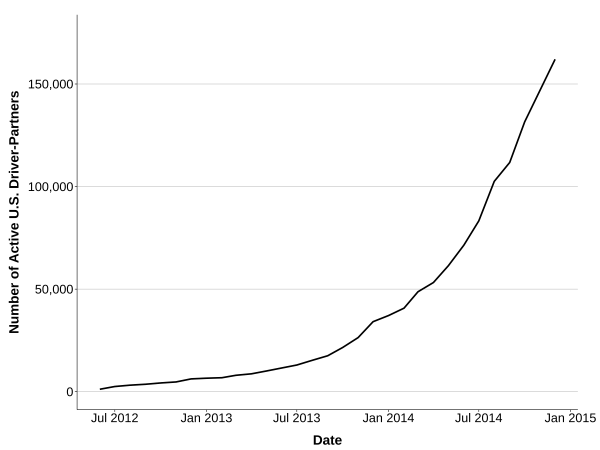 Our society is constantly in a hurry to get from point A to point B, people have appointments, family commitments, and work meetings in which they attempt to balance day after day. With such a fast-paced environment many people choose to turn towards public transportation as a faster, more efficient, and sometimes even less expensive alternative to using their own car. We often see the use of public transportation in large cities, where subways are common, buses are used multiples times a day, and now in today’s current era, Uber drivers are used on a daily basis, becoming common everywhere. When Uber turned 5 in 2015, there were essentially one million Uber drivers in place. Since then, the number of drivers has, and is expected to continue to grow, flourishing in the years to come. Can you imagine, over one million drivers everyday could potentially be hauling small children, and maybe even infants who are not receiving the proper safety measures needed and required by state laws?

On average 1.3 million people set out in their cars every year and don’t return home due to a fatal car accident. This number is overwhelmingly large, but what is even more concerning is that in a recent study, 57% of deaths that occurred between children 0-15 were because they weren’t properly restrained as state laws suggest they should be. States have put car seat laws into place for a reason, and it’s because these harsh and saddening statistics are a reality that affect many people every year. What concerns many, is that even with these real-life statistics people still 100% of people choose not to follow these regulations that have been set. On top of this statistic, there are still a staggering 75% of people who try to conform to the law regarding car seat use, but fail to use these seats like they are intended to be used.

When you walk down a road in New York City, do you see parents carrying around car seat for all of the children they have walking alongside them? Unfortunately, the answer is not very often. If you don’t have a child, or if you’ve never been educated on the harsh statistics that come with vehicle accidents, then you probably don’t think twice about it. You may think taxi’s carry car seats in their trunk, or that such safety seats are provided if requested. But in reality, the answer is many people simply disregard the use of safety seats due to the inconvenience that comes along with carrying such a device around. It’s concerning to think that “the solution” people have come up with for the issue of disregarding safety seats, is that children under the age of seven, are permitted to sit on an adult’s lap for more safety.

But does this actually provide much more safety then being directly set into the backseat of a car? More importantly, is this really the same as being strapped into a safety regulated car seat? I believe we all can conclude the answer is no. People also throw around the excuse that car seats aren’t needed in taxi’s because cars don’t travel fast enough in cities such as New York to do any many damage in a car accident. In reality, 3 people die every day in the city alone, and a staggering 48 are injured on a daily basis. The loss of three lives every day, each of which impacts an entire family seems like a big enough reason to ensure car seats are put into use by all, no matter what type of transportation is being used.

How do Uber protect the children?

Even if one was to believe such an uneducated statement regarding New York taxi’s, what about the new wave of transportation that technology has brought forward? Uber drivers are essentially found in all states, and deemed a global success, yet how do they protect the children of today? With the accident rate being so alarmingly high, the Uber drivers act essentially the same as a normal driver, so why aren’t they subject to the same safety laws as normal drivers? Shouldn’t they be required to provide protection for children just as normal drivers are required by state law to use a car seat? To me, it seems undoubtable that car seats should be required to protect those who can’t yet make their own decisions. Children are helpless in that they can’t decide where to go, which car to ride in, or whether or not to be fastened safely into a car seat. They rely directly on the knowledge of their care taker for all basic life necessities, safety being a main component.

Based on a recent study by Gregory Fayward regarding parking lot accidents, 277 people are injured due to being struck by a car every year. This number is very small when compared to the staggering 1.3 million that die each year due to actual accidents, yet almost every time you step out of your car in a parking lot you see a mother or father grab their child’s hand for safety. In fact, one would be seen as doing wrong if they didn’t reach for their child’s hand, as the child may not yet know better. What does this say about not strapping your child into a car seat? When crawling into an Uber without a car seat for your child you’re essentially gambling with an odd that is incredibly more likely to take place. If you wouldn’t let you child jump out of the car and run freely through a parking lot without looking both ways, you definitely should not allow an Uber to carry your child from one place to another without proper safety measures put into place. 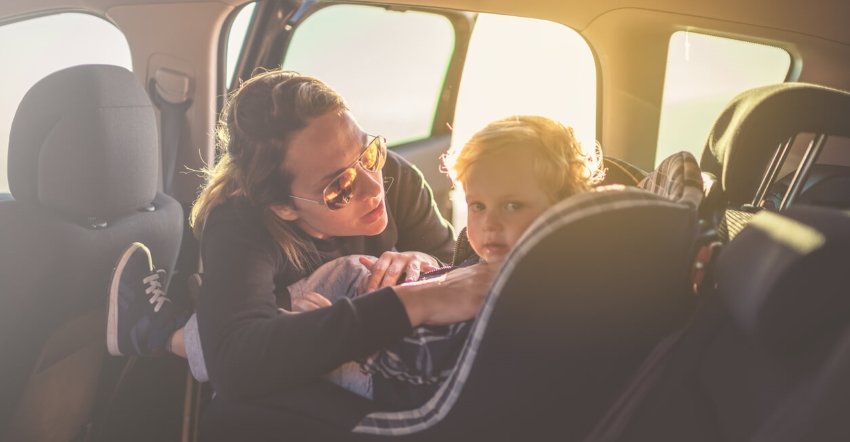 In the United States alone children are advocated for on a daily basis, laws are put into place to ensure children live in a good home, that they have enough to eat, and to even make sure they are strapped safely into a car seat when riding in a normal vehicle. Child service activists make a stand for children who live in abusive homes and remove them from potentially hazardous situations, but who’s standing up for the children who are being put in the hazardous situation that involves riding in a car without safety seats? What does an Uber have that requires less protection than a normal vehicle? Do they have extra heavy-duty doors that protect from accidents? Or crash proof driver?

The answer is no, these drivers are individuals just like you and me, with cars as ordinary as anyone else. It only makes sense that Uber drivers be required to carry around a car seat for potential riders, that may happen to require a seating with a higher level a safety. The main reason due to this lack of safety, is because people some to be uneducated on the topic at hand. There is no time better than now to ensure Uber drivers are required to have proper safety regulated car seats. This action needs to occur soon, before more children are put directly in the line of harm’s way.